What Do Saved Lists and Average Interaction In Influencers Mean?

The influencer section has some really handy filters that improve the accessibility of information on your fingertips.

You can save influencers to a list for instant access at any time. Ultimately, this will help you organize your influencer list according to their industry. For example, if you have influencers related to your "Fall Campaign" you can make a list and categorize taccordingly. 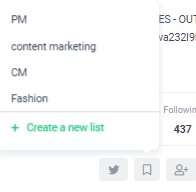 Sort the searched results on the basis of average interaction to list the ones with the highest interaction rates on top. It is optimal to select influencers based on high interaction with their users, as this shows a deeper connection and higher engagement. This also signifies that followers are more likely to catch up on what the influencer says, rather than just being a number on their follower list.